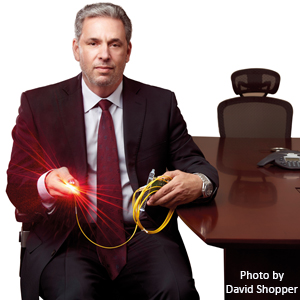 Anthony Amicangioli, Founder & CEO The brassy clang of the trading floor bell brings life to yet another action-packed day at the heart of America's financial industry—Wall Street. As the trading day commences, over 100 million electronic orders from market makers and quantitative hedge funds race through Hyannis Port Research’s (HPR) risk management system—Riskbot®. In less than half a microsecond, Riskbot® verifies forty-seven pre-trade risk dimensions, preventing erroneous trade orders from being transmitted to various stock exchanges. Nevertheless, there’s a caveat: The cost of a major misstep here would be dire for HPR, their clients (mostly global bulge-bracket banks) or their end users (the funds). HPR protects daily aggregate client value exceeding 10 billion dollars. With absolute precision, the HPR support team monitors risk parameters and numerous system metrics on their operations center screens. As the trading day comes to an end, the figures look impressive: half of one billion shares traded on HPR equipment, representing approximately 12 percent of the entire U.S. stock market. Another successful day for the HPR team.

“An HPR trading day is like a NASA space flight,” says HPR CEO Anthony Amicangioli, “from pre-flight checks of diverse systems and parameters, launching through the morning trading auction, and safely landing through the market close, providing flawless post-trade audit and regulatory reporting.” A seasoned entrepreneur and expert on pre-trade risk management, surveillance, and cyber security, Amicangioli has a thorough understanding of robust and advanced trading technology, which forms the core of HPR’s technology capability.

HPR's patented technology was designed in response to the Flash Crash in 2010 where a single erroneous trade cascaded through numerous computer trading systems causing the Dow Jones Industrial Average to drop 1,000 points or 9 percent, in 5 minutes. HPR’s Riskbot® was created to monitor trading activity and stop bad orders from reaching the market while sitting directly in between the trading clients and stock exchange servers. The system provides a protective real-time-risk layer between various trading entities. 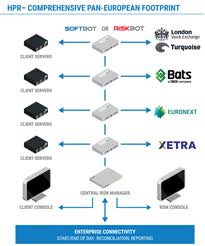 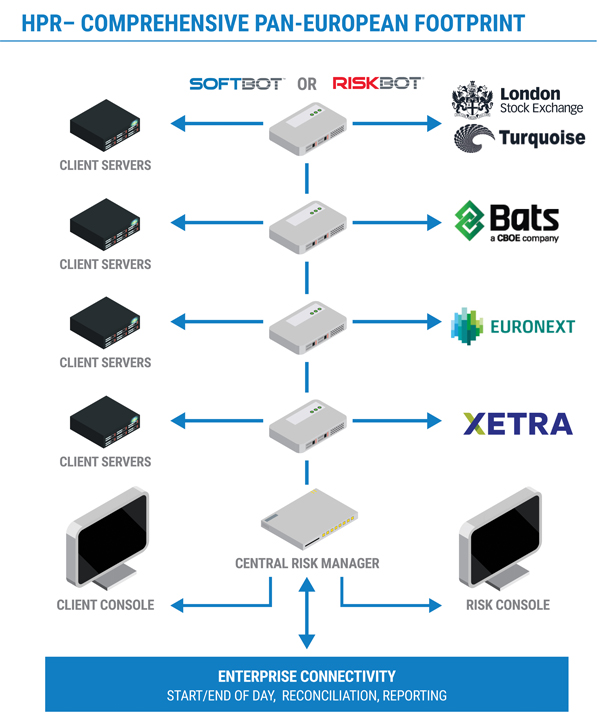 It wasn’t long before HPR climbed the top ranks in controlling risks and monitoring trading traffic for quantitative hedge funds. Fast forward to today, “We design, create and manage advanced financial technology systems for global banks and hedge funds. We view ourselves as a comprehensive financial technology provider rather than a single ‘point-product’ provider,” says Amicangioli.

Besides their high-performance real-time risk and gateway solutions for international markets, HPR has created a flexible and scalable technology infrastructure that allows them to build any and all facets of a bank’s technology stack. HPR’s technology DNA allows the application of cutting edge technology such as chip design (field programmable gate array- FPGA), high-performance data-processing, fault-tolerance, and big-data techniques to any FinTech product using HPR’s ‘Scale’ technology. From smart order routers to revolutionary matching engines, the product offering built on the company’s Scale technology ensures market safety with unparalleled performance and reliability.

“HPR is a recognized leader in the financial technology equipment space providing industry-leading speed that can process a trade in 360 nanoseconds—the time it takes light to travel approximately 400 feet,” explains Amicangioli. The company has built a powerful team with skills spanning super computer design, hardware, software, networking and telecommunications; including engineers from the world's largest chip manufacturer.

HPR’s business model primarily relies on two major trends. First, banks are increasingly looking for ways to cut costs as part of an industry-wide (and seemingly relentless) business trend. Secondly, the appetite for risks associated with creating advanced technology systems internally has vanished. A system such as HPR’s Riskbot® would require between fifty and one hundred million dollars in investment to bring to market when measured against comparable telecom equipment start-up budgets.Meanwhile, the need for banks to compete technologically continues to increase. 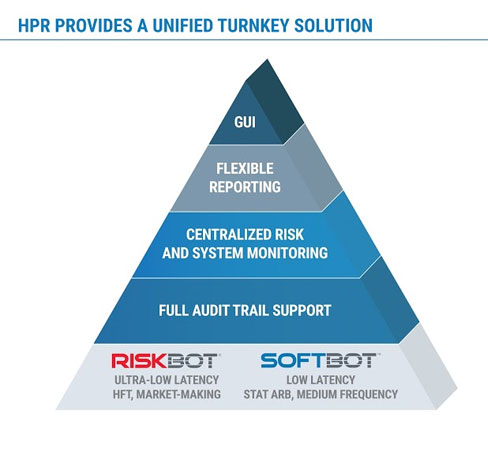 Hence, as banks must first and foremost master providing high-quality banking services, the question as to whether they must simultaneously double as technology companies is a vexing one for Wall Street management teams. HPR believes yesterday’s in-house model will not prevail, giving way to increased reliance on highly capable technology companies; banks will increasingly look to such providers to arm them with the equipment and services they need to maintain a competitive advantage.

“The specter of bulge-bracket banks’ staffing teams comprised of bankers, legal, and compliance experts, all mixed with hardware, software and support engineers seems remarkably flawed. Our clients have figured this out and are benefiting immensely by focusing on their core competency while allowing HPR to provide them with the industry-leading solution for a significant portion of their technology stacks,” says the CEO.

Amicangioli shares a client success story where an industry-recognized name in market making was able to double its order and cancel fill rate, allowing them to participate in a set of trades that they were never able to do before.
In another case involving a trading fund, HPR assisted the client to better manage risk with a dramatic increase in successful control of transactions. At the helmsmanship of delivering groundbreaking technology the team is ready to script a whole slew of such success stories.

In an era where companies use ambiguous methods to measure the speed and latency of their trading equipment, Riskbot G4's absolute determinism is evident through HPR’s NanoView precision latency probe that determines total latency added by the appliance with accurate performance statistics; ascending the efficiency status to reach unfettered access performance levels.

Another major component, Riskbot M5—the firm’s distributed enterprise real-time risk system is a high-performance software appliance, which also acts as a centralized real-time risk management and control system provisioning high-level alerts and visibility across complex trading domains. The enhanced visibility and alerts provide fine-grained control to shut down suspicious activity on a trader, on the basis of an account or exchange connection.

Adding to its powerful hardware arsenal, HPR has just released a software-based risk management product, Softbot™ that is geared toward buy-side firms, quantitative funds and other less latency-sensitive clients requiring MiFID II compliance in the European markets with enhanced API functionality. The mix-and-match of Riskbots and Softbots allow clients to right-size deployments from a price, performance, scalability and functionality standpoint.

Amidst its journey to prominence, another facet where HPR has excelled is the ability to create a large technology stack with a comparatively small team. The credit goes to a unique culture that seeks to foster innovation by building many components from scratch. Amicangioli illustrates, “If you are building a Formula One race car, chances are you will ‘reinvent’ a version of the wheel that is substantially different than the first potter’s wheel invented 3500 B.C. Sometimes it’s better or even necessary to ‘reinvent a wheel’. Today’s engineering environment has taken the ‘never invent it here’ axiom to a tragic extreme that leads to immense design bloat and performance drag. The result is that far too many companies are developing capable coders rather than engineers.”

The win for HPR is bringing on board many great people who are looking past foosball and ping-pong tables (though HPR does have them) and are wisely opting for a job that will teach them real and fundamental engineering skills. The company also centers its product architecture on an approach that supports collaboration. This means that engineers can share work and easily cross-train. “In a nutshell, this approach to our engineering-driven environment illustrates our ability to build a culture that leverages mutual technical curiosity and passion for fostering strong professional connections,” says Amicangioli.

HPR has been growing leaps and bounds in the last two years. At present, the team is deemed one of the preeminent players in the domain of distributed risk management systems, by shares traded, and quality and functionality provided. HPR’s client roster includes Wall Street’s elite market makers and hedge funds, and the firm reports recent shipments to Europe and Asia including England, France, Germany, Hong Kong, and Japan.

Full steam ahead, HPR, a harbinger in the realm of risk management and market gateway solutions, is tirelessly pushing the envelope beyond provisioning conventional trading wisdom. Amicangioli’s plans are ambitious, vastly exceeding HPR’s current product line(s)—“while we are, by a number of measures, the number one provider of pre-trade risk systems, we would like to be the number one systems and technology provider for the presently untapped market-structure equipment sector.” 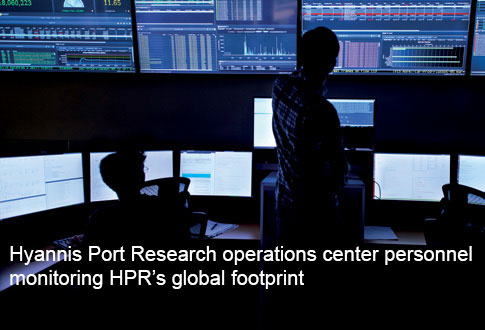 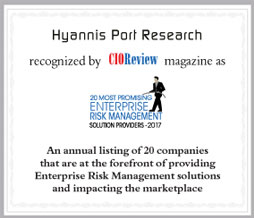 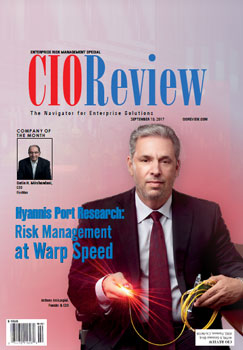